From Taiwan to Morocco: Tea Rituals Around the World

“When tea becomes ritual, it takes its place at the heart of our ability to see greatness in small things. Where is beauty to be found? In great things that, like everything else, are doomed to die, or in small things that aspire to nothing, yet know how to set a jewel of infinity in a single moment?’’ – Muriel Barbery, French novelist and Philosopher, The Elegance of the Hedgehog

Rituals, no matter how often repeated with the same gestures, have the power to move us as individuals and communities, in solitude and harmony. Rituals have been humanity’s common thread through the ages across the world, and tea rituals are no exception. From a form of meditation to a way of celebrating moments in life, various significances are steeped in the act of brewing tea. With a favourite cup of tea by our side, let’s look at some inspiring tea rituals across the world.

The British Isles: The True Hosts of Afternoon Tea Parties

George Orwell once wrote that tea was one of the mainstays of civilisation in Britain. “A nice cup of tea,” asserted Orwell, “has the power to make one feel braver, wiser and more optimistic.’’ This holds true for a nation that made the ritual of Afternoon Tea a worldwide phenomenon.

Afternoon Tea was a highly indulgent affair of the ‘The Ton’ or the crème de la crème of British society to socialise over cups of tea and light meals served at around 4 pm. Today, you can enjoy a High Tea in the luxurious Tea Houses that dot Britain or in Luxury Hotels such as Ritz in London.

India: The Land of Diverse Teas

India’s tryst with tea is incomplete without the British colonisers, but it is the nation’s diverse cultures and cuisines that have given tea a unique identity. The spice-ladened, milky masala chai served in traditional clay pots, is a popular beverage albeit not the only type of tea. 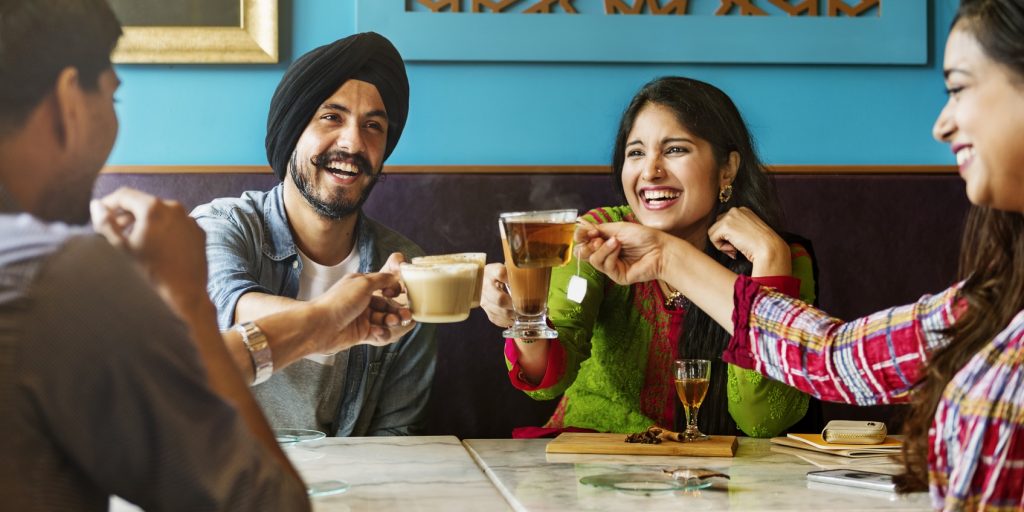 The teatime ritual, however, remains the same across India – cups of tea with indulgent snacks are shared with friends or family in the early evening, as a break from the day’s work.

In Indian households, a guest is usually a delightful excuse to make tea. No wonder they are greeted with an option of ‘chai pani’ – tea being more important than water! If a guest is not offered tea, his/her welcome ritual remains incomplete.

Morocco: Mint Tea at the Heart of Hospitality

Extending hospitality with tea is universal. For Moroccans, it’s a way of life, and steaming-hot mint tea – a combination of Chinese gunpowder green tea, mint sprigs, and sugar – is an essential part of it.

The ritual is a visual feast. Tea is served to the guests from a standing height into the glass below – an art and skill learned and perfected over time. This elaborate gesture is performed to aerate the tea with froth at the top of the glass, making the drink more flavourful as the aroma releases in the air.

Some also pour teas into two glasses. Usually, the tea from the second glass is poured back into the kettle which is a way to help circulate the flavours.

Contrary to the stereotype of vodka-drinkers, the Russians love their tea, especially to  warm in the cold weather. Once this was done literally, with a samovar. The half stove, half teapot vessel was traditionally heated with coal to brew zavarka, a strong tea, over which casual meetings would turn into meaningful social connections. 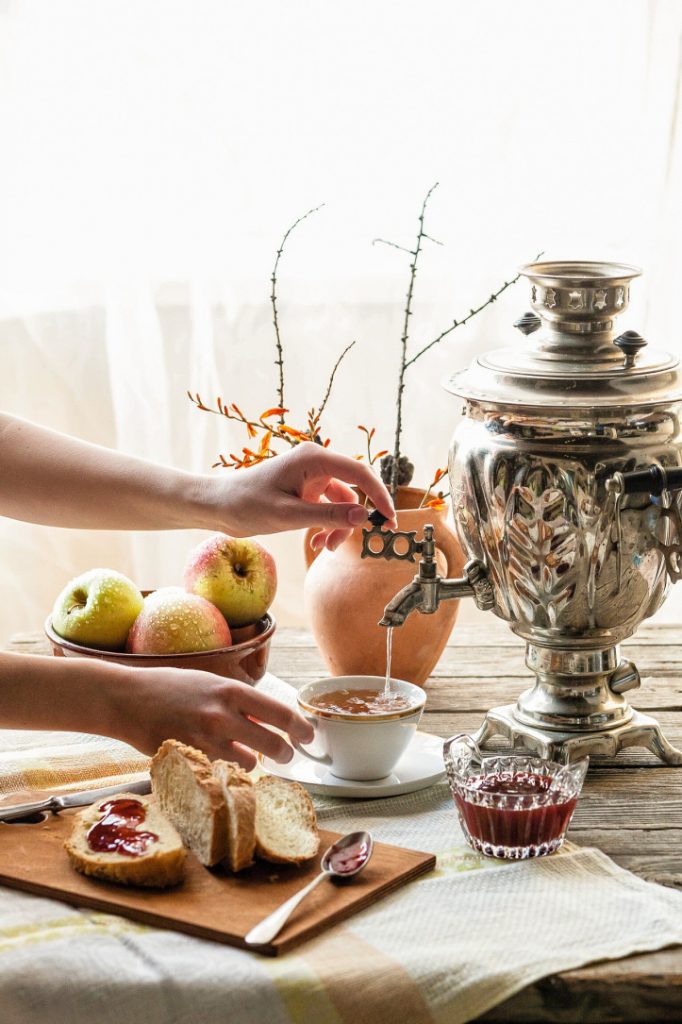 Like the samovar, tea found its way across the country’s snowy borders through the Silk Road that connects present day Mongolia and China. The Russian Caravan, a tea popular for its smoky flavour is said to have originated from these long journeys. During the night halts, the Russian traders would make bonfires to keep themselves warm. The smoke from the bonfire would get into the tea packed on camels resting near the fire. Today, to continue the balance of smoky and sweet, Oolong and Keemun teas are blended to attain the smoky flavour.

China has over 3,000 years of tea culture under its belt, and so have several rituals devoted to tea. One of the most significant rituals is the traditional Chinese wedding where the newly married couples serve tea to the family as an appreciation for all the years of nurture and love and seek blessings. The tea ceremony symbolises a new family, stability, and fertility. 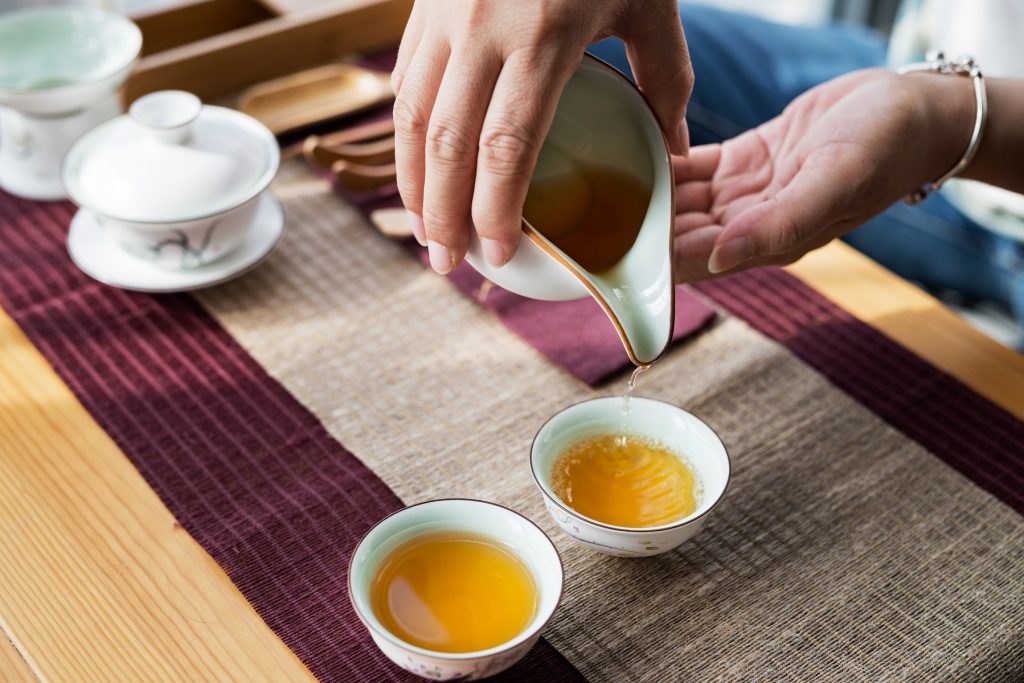 Tea drinking, on other occasions, is a relaxed affair in most local homes and tea houses. Once the tea is finished, a new cup is often served without even being asked. This tea ritual is often accompanied by a discussion on the taste and aroma of the tea, often an icebreaker or a way to bond over tea.

Perhaps one of the most sophisticated and artistically choreographed rituals is the Japanese tea ceremony. From the Buddhist priests to the Samurai warrior class, the tea ceremonies sought precision in everything – the type of drinking vessel, the palette, the season – making it formal affair.

Known as Chanoyu or Sado, the tea ceremony doesn’t focus on the tea as the end, rather aesthetically presents the process of tea making to channel the principles of Zen Buddhism, namely inner harmony, tranquillity, purity, and respect.

Known for some of the finest ‘Oolong teas’ in the world, Taiwan’s tea rituals are equally central to its 400-year-old tea culture with influences from the Chinese and Japanese tea rituals.

The Taiwanese tea ceremony, drawn from the Chinese tea ceremony Gong Fu, is conducted in many stages. The pot and cups are warmed, the leaves are washed and rinsed, the water is poured from a specific height and tea is brewed for a specific period.

The correct way of drinking Taiwanese tea is to first rinse the tea leaves in hot water to get rid of the bitterness and impurities, and then re-steeping the leaves in fresh hot water.

One is required to appreciate not only the taste of the tea but also the aroma. Hence, the tea is first poured into scent or sniffer cups which are specifically designed to help the drinker appreciate the unique smell of the brew.

History, cultures and its peoples over the years have shaped the way we drink tea; however, one thing remains the same – the love for tea, as a collective society of tea lovers. Share your tales with us if you have any ritual that stands apart from these.